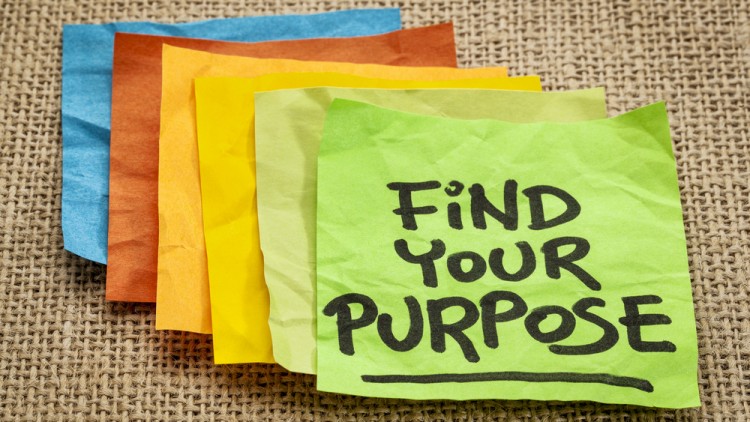 Actively seeking and finding purpose in your job (any job) can make you happier in the place where you likely spend five-sevenths of your waking life.

And that’s not all. Research shows that when people feel a sense of purpose at work, they are more satisfied, more committed to their organization, feel more motivated, and perform at a higher level (see psychologists Bryan Dik and Ryan Duffy’s book, “Make Your Job a Calling” for a great overview of this research).

This definition reminds us that nothing “just is.”

And, at the end of every supply chain for every product or service that exists on Earth is a human being.

Therefore, if your job exists on this planet (which, I am assuming it does), then you are doing something for, or providing something to, other human beings.

We are all in the industry of human service and you can’t escape the fact that you matter.

Reflecting on and uncovering the global purpose of your job is powerful, can be life changing, and can transform organizations.

Here are three ways you can do it today.

1. Ask yourself, “What would happen if my job didn’t exist?”

Consider this story, told in the book “Make Your Job a Calling:”

An old man worked in relative obscurity in the Austrian Alps that overlooked a small town. His sole job was to clear debris of out of pools of water that fed the river flowing into town. As the town was looking to cut jobs during a recent budget crisis, the town council couldn’t justify this seemingly meaningless job and decided to cut the old man’s position among others.

As weeks turned into months, silt, branches, and other debris began flowing down the river in the narrow canyon. As silt and branches built up, the water became clouded, and over the next year, the buildup of debris slowed the river’s flow so much that mills in town using the water for power had to be shut down. Many people lost their jobs. As the river’s tint became yellowish, tourists who used to come to photograph and enjoy the river began choosing a village on a nearby stream. Townspeople who were using the water to irrigate their crops were unable to rely on the slowing water flow, and livestock drinking the water became ill.

The town council was mystified.

That old man’s simple job in this story had a dramatic impact on the vitality of an entire village.

Every job and every person matters. We actively choose to see and uncover why – or not. Try asking these questions as you begin this and every day.

2. Talk to the people your job impacts.

Whether you work part-time at the local burger joint or for a Fortune 500 company, talking to the human beings who need or desire your product or service can change how you view and do your job.

For example, a recent study examined cold-calling fundraisers at a university. The researchers divided the workers into two groups. One group of workers had the opportunity to hear the story of a student that was a recipient of a scholarship and the second group did not. Researchers found that the workers in the group who knew the story of the fund’s recipient, and the difference the money made in the pursuit of her dreams, made double the amount of phone calls and raised three times the amount of money when compared to the group who did not hear the recipient’s story.

The people your job serves are sometimes the best source of inspiration and purpose. Spend some time with them. Ask them, “Why do you come here?” See if your supervisor can bring a real customer in to tell their story. Read those customer service comments that often go unread and underutilized.

If you are a supervisor, manager, or leader – try finding stories of how your product or service enhanced someone’s life and bring them into the next monthly meeting.

Undoubtedly, you will discover that your job does change someone’s life and many times that makes it all worth it.

A few years ago during a workshop about designing purposeful customer experiences, I asked the question, “How have you changed the world today?” The most common reaction was… silence.

The response that came in a close second was, “I haven’t + [nervous laughter].” Then, I asked it again, “How have you changed the world today?” At this point the workshop participants knew they weren’t getting off the hook (maybe because I said I was going to have each person share).

They started delving deep and truly reflecting on the little moments in their mornings – buying coffee at a local coffee shop, smiling at a stranger in the parking lot, or simply deciding to come to work. One participant shared, “I got my kids ready for school.”  When I asked how that act changed the world, she went on to say that by getting her kids to school she initiated the first step in them contributing to this world, finding their passions, and learning to interact positively with others. She said, “…who knows what they will become in this world because of what they learned in school today.”

Imagine if we consistently thought of our routines and actions like this each day in our jobs.

In the routine, small, and seemingly mundane moments of our work we can truly see and trace our individual capacity for global change. I am not talking about the sometimes superficial “changing the world” phrase we throw around a lot; I am talking about real and traceable impact.

I didn’t always understand this capacity. I always thought I had to start some large, visible, resource-driven global movement to achieve true global change.

You don’t have to be the CEO to change someone’s life.

When I started work here at Colorado State University, one of the first e-mails I received was from someone I thought I had never met in my life. The gist of the message was, “Zach, thank you for helping me get to where I am right now, I am truly living my dream, and I just needed to thank you.”

I immediately thought, “…who is this and what do they want from me?” I wrote back explaining that I was unsure about who exactly they were, and that I thought she had the wrong person.

She replied and told me this story:

It was July, 2004 and she was a first-year student at an orientation program at James Madison University (where I was a student orientation worker). Apparently I said, “Hey, how are you?”

She explained that she was upset because she wasn’t excited about her major (she came in as an economics major). She went on to tell me she was ready to withdraw from the university.

So, I asked her, “…what would you do every day of your life if you could get paid for it?” She went on to talk about her love for writing.

Personally, I don’t remember any of this. She said that I walked her to the journalism department and told her that she could potentially major in journalism. That was it. I went on my way and she went on her way.

According to her, this was about a 4 minute interaction. I did not remember or think about it ever again… until I got that e-mail.

She now writes for a major magazine in New York City, has created a close circle of friends, is involved in her community, is following her passion and living her dream of writing every day for a living, and is actually in the process of planning a wedding to someone she met there.

She attributed where she is in life to a “Hey, how are you?” that frankly I have no recollection of. This is what impact looks like.

I wish that I had approached every conversation in that part time job knowing the power such a simple, small moment.

We may not see or feel our job’s significance in this world, but every day and in each moment we are making a lasting impact whether we recognize it or not.

By actively recognizing the impact that you can have in small moments, hearing the stories of the people your job serves, and believing that you matter you can find a sense of purpose in any work.

Finding purpose in your job can scientifically make you happier, healthier, and a better employee.

2 thoughts on “How to Find Purpose in Any Job Today”